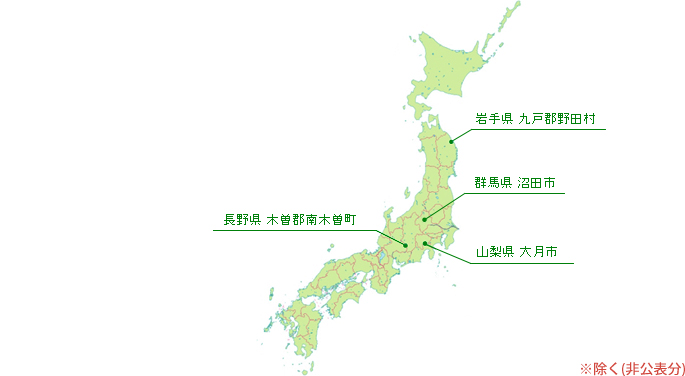 Since 2012, we have been working on a project to construct a 14,000kW capacity biomass power plant in Noda-mura, Kunohe-gun, Iwate. The site is an area of approximately 30,000 m2. We estimate that 140,000 tons of fuel will be consumed annually, which is comprised of 70,000 tons of unused wood, 10,000 tons of bark(the outer covering of a log), 20,000 tons of pruned branches, and 40,000 tons of palm kernel shells(PKS), and everything will be produced domestically except PKS. Within the premises, we are considering to construct facilities for crushing, dying, biomass fuel storage, and recycling burned shells, in addition to the power plant. Total investment is approximately 6.5 billion yen, and we estimate an annual income of approximately 2.6 billion yen through sales of electricity to utilities.

In September 2012, we concluded a memorandum of understanding with Noda-mura concerning the biomass power generation project and the “Noda-mura Generation Co., Ltd.,” a local subsidiary, was established in February 2013. Local briefing were held following the briefings for landowners. The village administration office and forest owners’ association of Noda-mura, related companies and others explained to the Reconstruction Agency and Iwate Prefectural Government about the biomass power plant construction project. The company’s name was change to Noda Bio Power JP Co., Ltd. On August 1, 2014, which was announced through a press release. A news conference and a ceremony to pray for safety were held on August 6, 2014. The construction was completed in May 2016. It officially started commercial operation in August 2016.

We are planning to develop a biomass mono-fuel power generation project in the Ishikari Bay New Port Industrial Park in Ishikari City, Hokkaido. The site of approximately 50,000 square meters (5ha) will have power plant constructed there with a generating capacity of 50,000kW (50MW) of electricity, one of the few such large scale plants in Japan. We plan to use fuel such as palm kernel shells (PKS), a type of biomass fuel imported from overseas, along with local wood. Imported fuel will be unloaded at the West Wharf of the Ishikari Bay New Port.

The power plant will continue to operate in Ishikari for a long period of time, over 20 years or more. A biomass power Plant in particular is a type of power plant that depends on people. This means that local employment opportunities will be newly created. A ripple effect is also expected across industries associated with the power plant. As a company operating in the power generation business, we will also, for example, contribute to the region by paying city tax and prefectural tax. The power generated will be supplied throughout Hokkaido through Hokkaido Electric Power Co., INC.

We will continue to collaborate and develop closer cooperation with administrative bodies such as Hokkaido, Ishikari City and the Ishikari Bay New Port Authority, as well as with local businesses such as Ishikari Development Co., Ltd., as we work toward bringing the project into being.We plan officially start commercial operation in August 2022.

We have been working on a project to construct a 54,500kW capacity biomass power plant in Yonago city, Tottori. The site of approximately 59,000㎡ (5.9ha). We plan to use fuel such as wood pellets and palm kernel shells (PKS), a type of biomass fuel imported from overseas. We continue to collaborate and develop closer cooperation toward bringing the project into being. We plan to officially start commercial operation in March 2022.

Development power plant (including under construction)

We established Otsuki Biomass Hatsuden K.K. in October 2010, and have been working with Yamanashi Prefecture and Otsuki City on the “Otsuki biomass power generation project (tentative name) “ from the planning stage on administrative formalities including environmental impact assessment procedures.

In April 2015, we sold all our shares in Otsuki Biomass Hatsuden K.K. to Obayashi Clean Energy Corp., a wholly-owned subsidiary of Obayashi Corporation, thereby transferring business rights to the Obayashi Group.

The site area of Obayashi Otsuki Biomass Power Plant is approximately 2 ha. Commercial operation started in August 2018. Going forward, we will continue to support the Obayashi Group, a business owner, as a technical advisor.

It plans to construct a power plant with an area of 45,000 square meters and a power generation output of 51,500 kW in Takaoka City, Toyama. We held discussions with Toyama Prefecture and Takaoka City, and gave explanations to the local community. In October 2017, we sold our entire stake to Joint company NBE-02 Investment, a group company of Equis Bio Energy Co., Ltd., and transferred the business right. Commercial operation is scheduled to begin in December 2021.

We are planning to construct a power plant with an area of 50,000 ㎡ and a power output of 51,500 kW in Kamisu City, Ibaraki. We held discussions with Ibaraki prefecture and Kamisu city and explained to the local community. In January 2018, the business was transferred to Obayashi-Kamisu Biomass Power Generation Co., Ltd., a group company of Obayashi Corporation. Commercial operation is scheduled to start in August 2021.

We are working on the development of a woody biomass power plant that actively utilizes regional timber and woodland unused timber in Hokkaido's central zone.